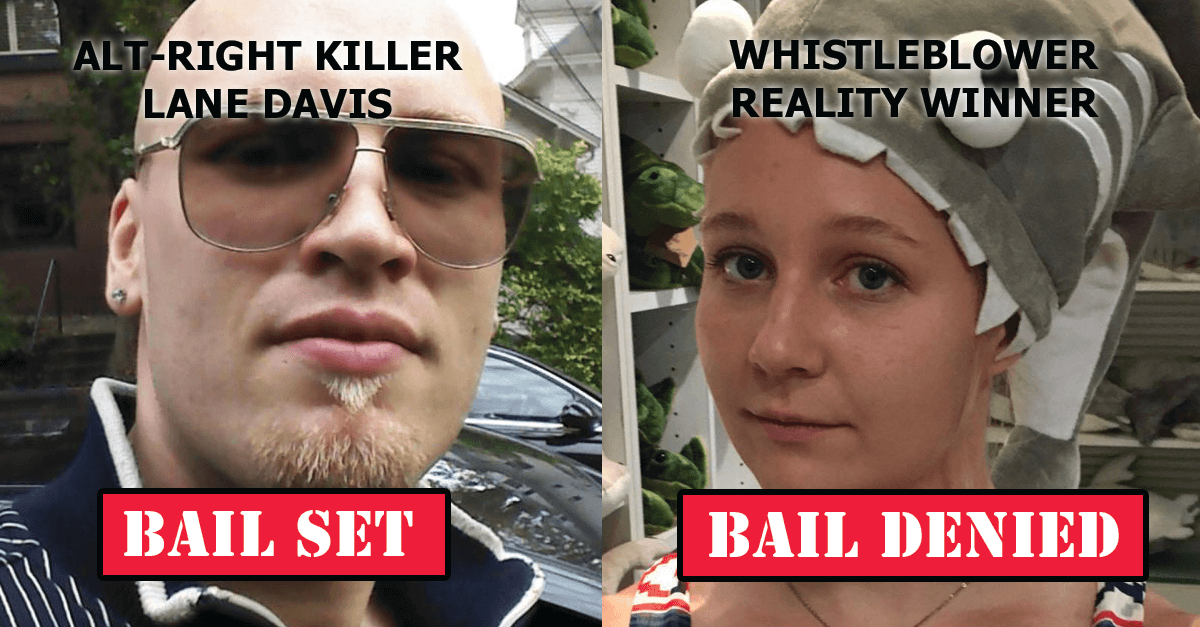 Reality’s defense team filed an appeal last week, seeking to reverse the decision to deny her bail and hold her in jail until March, setting the stage for a precedent-setting trial with implications far beyond this one case.

The appeal is important for several reasons. First and foremost, it’s important to keep fighting for Reality’s release because she doesn’t deserve to be in jail. She has not been convicted of any crime, has no criminal record, and has a spotless record of service to her country. Her attorneys point out that Reality is “accused only of leaking a single document, a single time, to a single domestic source, for no financial remuneration, to a news outlet.”

The new appeal highlights how those factors were entirely ignored by Magistrate Judge Brian Epps in Reality’s most recent bail hearing. It also highlights how unusual Reality’s pre-trial detention is — her defense team provided the court with a long list of cases in which defendants charged with the same crime were granted bail, and even held to significantly less restrictive conditions than Reality has already agreed to. This new defense motion will be decided by the eventual trial judge, Chief Judge J. Randal Hall.

How rare is such a no bail ruling? Just last week, prominent Alt-Right activist Lane Davis murdered his father with a knife, after his dad called him a nazi. Lane Davis had a bail set at $1,000,000, an amount that Reality’s parents were prepared to post, but were denied the opportunity to do so.

While Reality’s pre-trial detention is unusual, it’s not surprising. It’s been obvious from the beginning that this is both a politically motivated prosecution and a strategically offensive move in Trump and Jeff Sessions’ war on whistleblowers, the media, and anyone shining a light on government wrongdoing.

That’s another reason this appeal is so important — it is laying the groundwork to fight back against these tactics, crafting a defense strategy that, if successful, will have an impact far beyond this one case.

This section in particular from the appeal document makes the strategy clear:

“…the parties dispute the elements that constitute violation of § 793(e). The Government contends that to convict Ms. Winner, they need to show only that “a defendant in unauthorized possession of a document containing information relating to the national defense . . . retained that document without authorization, or transmitted it to someone not entitled to receive it, and knew that doing so was against the law” … Ms. Winner submits that there is more that the Government must prove, including that the information could actually damage the national security of the United States if disclosed…”

The Espionage Act is a loophole

The “classified information” in Reality’s case is now public and freely available for anyone to read on our website. Reading the document makes it clear why the government doesn’t want the burden of explaining the “harm” its release did. It’s an argument they would certainly lose.

That’s why this new appeal is so important — Reality’s defense team wants to force the government to prove what harm was done by the release of this document. Doing so would permanently end the government’s ability to use the Espionage Act as a loophole, and force them to acknowledge the legally guaranteed whistleblower protections of people who leak classified information, protections which pre-date the Espionage Act.

This appeal is important because it demonstrates that Reality’s defense team is going to fight hard every step of the way, both for justice for Reality herself and for all future whistleblowers facing the same transparently unjust prosecution.

Our only resources for this fight come from supporters of Reality. Donating just an hour’s wage per month makes a difference. Together, we can make this case a precedent-setting landmark in the defense of whistleblowers and the freedom of the press. Help us win by becoming a sustaining donor through Reality’s trial in March.