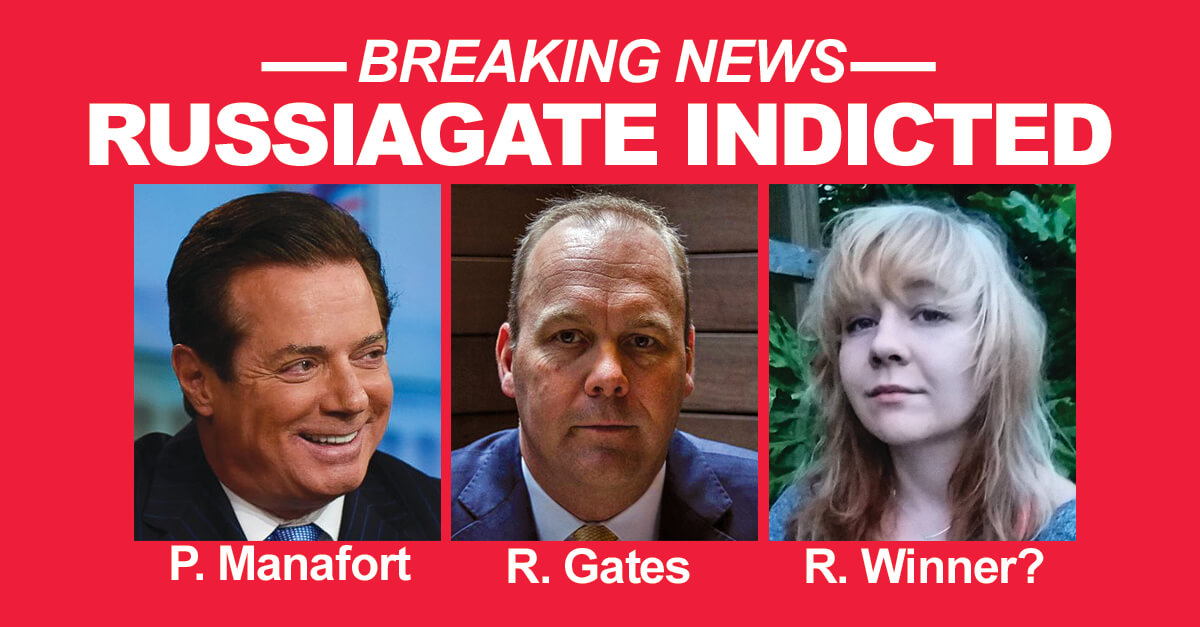 How is it that the only one in jail is the whistleblower?

If there was any doubt left that Reality Winner is being singled out for outrageous mistreatment by her prosecutors, this week’s indictments against Paul Manafort and Rick Gates should put that to rest.

Paul Manafort and Rick Gates are charged, among other things, with “Conspiracy Against The United States”. Their offenses against the United States, and the harm they did, are spelled out in great detail — they were paid millions of dollars by a pro-Russia Ukrainian political party to lobby the U.S. government on its behalf. They lied about acting on behalf of foreign interests and about receiving the payments. They then laundered the money to hide its source and avoid paying taxes.

The court correctly identified both men as flight risks, for the following reasons, according to a CNN article:

Because of all this, Federal prosecutors recommended that the men merely be placed on house arrest.

In contrast, Reality has already served 5 months in jail despite not being convicted of any crime. She is charged with leaking a single document to a media outlet. The government has argued over and over again that they don’t need to actually specify what harm, if any, Reality did to the United States, despite charging her under a law which clearly requires it.

Reality’s prosecutors argued, with a straight face, that her life savings of $30,000 and a short vacation to Belize earlier this year makes her a “flight risk,” and that two or three sentences from her private conversations are proof that she “hates America” and is a “danger to the community”.

Meanwhile, Manafort and Gates are charged with doing clear, explicit, quantifiable harm to the United States. Manafort spent more than Reality’s entire life savings in illicit, laundered money at a single Florida art gallery, and the only imposition on his freedom is an ankle bracelet.

The role of the Winner document in the Russia investigation

All of this is already an outrageous injustice. But what makes it so much worse is that Reality’s alleged “crime” is exposing to the public details of the conspiracy that led to the charges against Manafort and Gates in the first place.

Reality’s connection to the broader Russia investigation has largely been forgotten by the mainstream media, while they’ve focused on more well-known, powerful officials instead. So it’s important to remember the context of the document’s release.

As far as Trump was concerned, the investigation was over. In a meeting with Russian officials on May 10, according to an article in the New York Times, Trump said:

“I just fired the head of the F.B.I. He was crazy, a real nut job,” Mr. Trump said, according to the document, which was read to The New York Times by an American official. “I faced great pressure because of Russia. That’s taken off.”

The conversation, during a May 10 meeting — the day after he fired Mr. Comey — reinforces the notion that the president dismissed him primarily because of the bureau’s investigation into possible collusion between Mr. Trump’s campaign and Russian operatives.

According to an FBI affidavit, the “Winner document” was accessed and printed from the classified data system on May 9th, the day Comey was fired. I was allegedly mailed to the Intercept on May 11th — the day after Trump hosted the Russians at the White House.

When it was released, its shocking findings dominated the headlines: Russian intelligence had used offensive cyber warfare techniques against U.S. election systems, and the Trump administration was still keeping the affected states in the dark about it.

This was much more far-reaching and technical interference by Russian intelligence than anyone had even suggested up to that point. And it hit the news at a time when Trump administration officials were insisting that all the talk about Russia was just “fake news.” It wasn’t a sure thing that the investigation into the Trump campaign would continue at all.

In James Comey’s testimony to Congress shortly after Reality’s arrest, Comey said he also engineered a leak to the press to ensure that the investigation into Trump would continue.

These leaks were all crucial to the effort to secure a broad and independent investigation into the role of Russian interference in the 2016 election. Without these leaks, the investigation may not have gone forward, or had the same amount of support from lawmakers.

The government cannot continue to justify holding Reality in jail given the lenient bail conditions granted to Manafort and Gates. And the media can’t continue to allow Reality’s unjust imprisonment, and the transparent political motivations of her prosecutors, to go unnoticed.

The media always focuses its attention on the richest and most powerful, the ones least in need of the extra publicity. Reality’s crucial contribution to this ongoing investigation deserves a wider hearing. She deserves bail on at least the same conditions granted to Manafort and Gates, both of whom are accused of doing greater harm, and have far more resources and connections enabling them to flee prosecution.

Most of all, she deserves due process — the government should be required to actually argue what “harm” she did, especially when there’s so much evidence that the Winner document has been an enormous benefit to the public’s understanding of threats to our election systems. 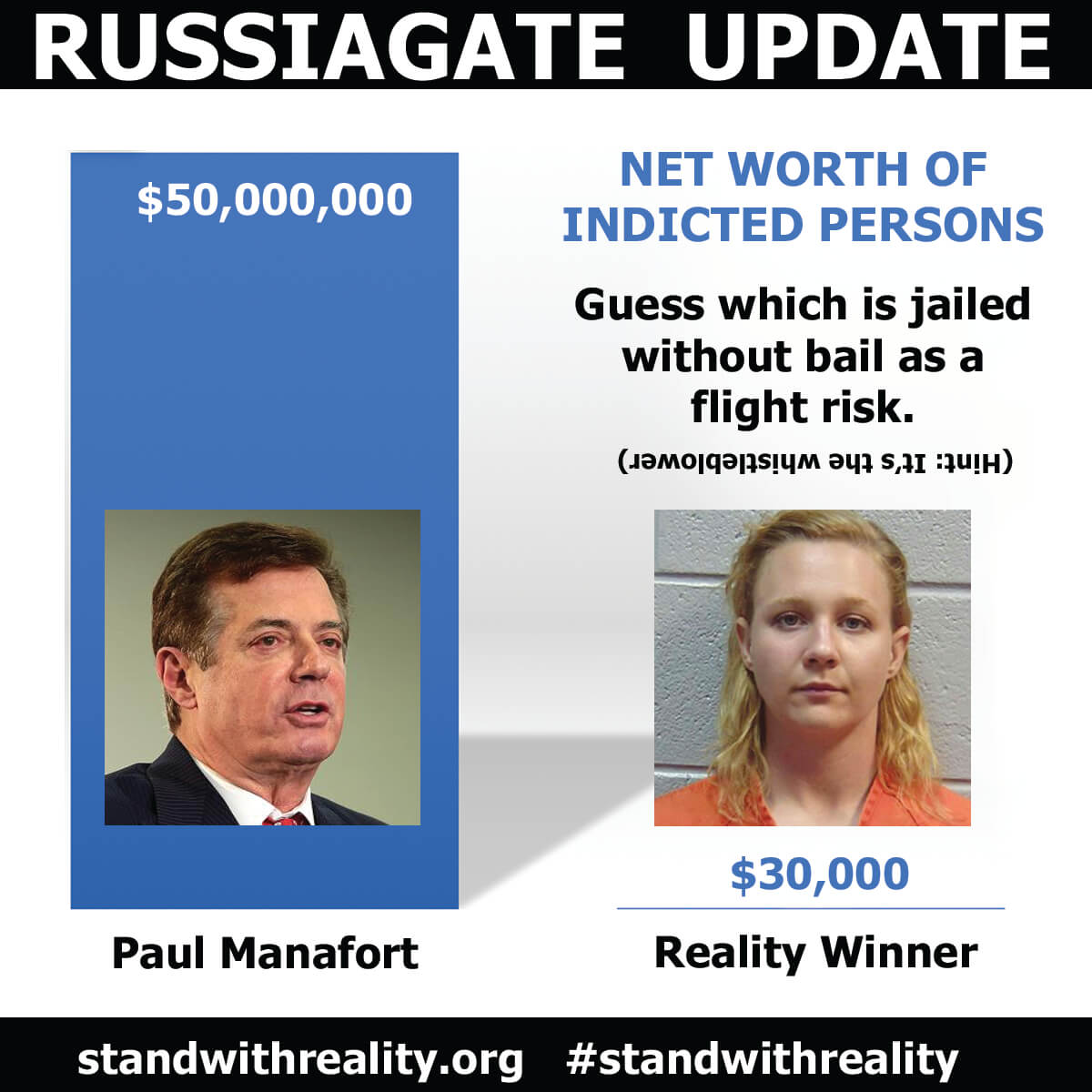 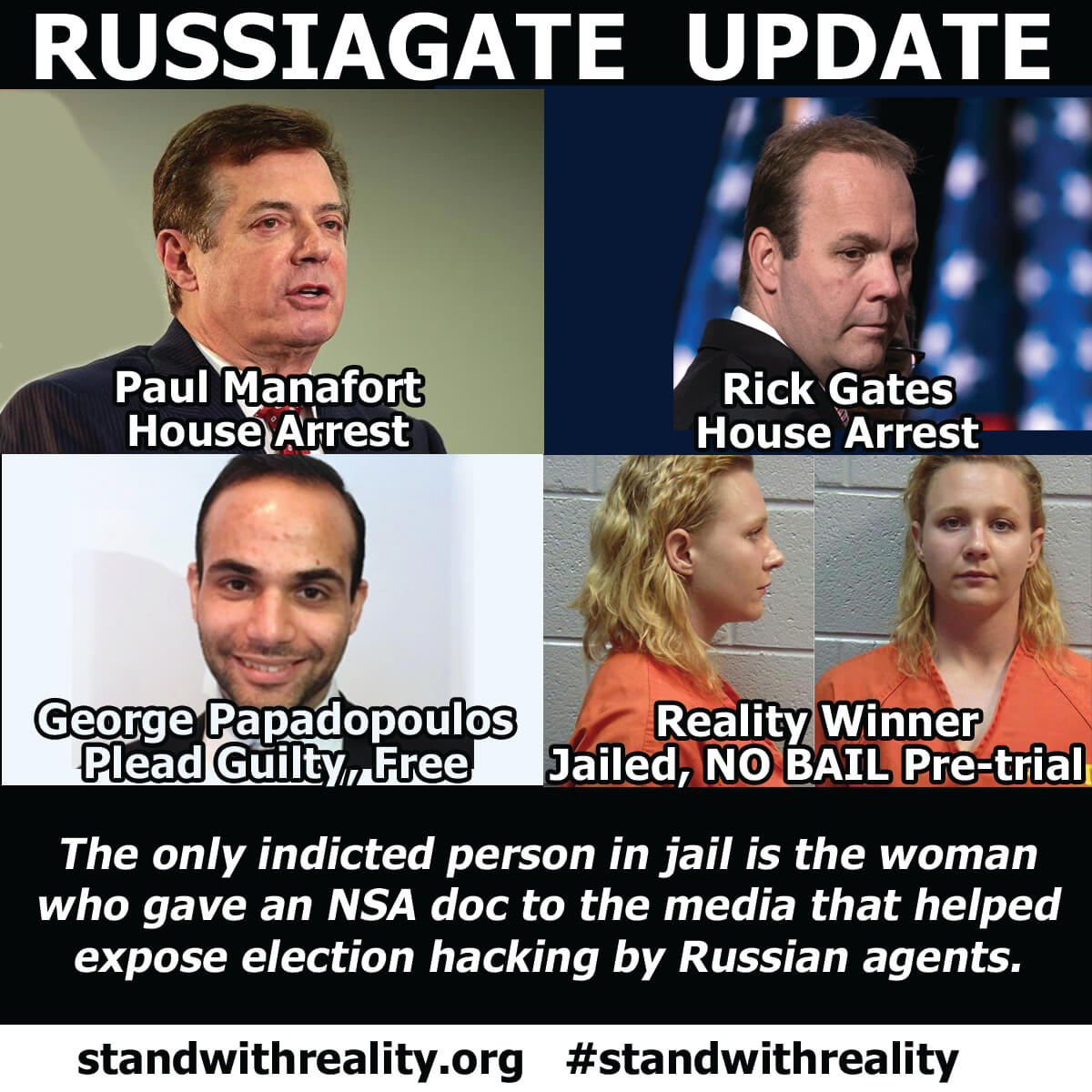